Adenosine is basically a by-product of energy production. The brain uses stored glucose as fuel, and adenosine is produced as a result.

One of the functions of sleep is to clear this neurotransmitter from the brain and to replenish stores of glucose ready to be used as energy by the brain the next day.

We’re going to take advantage of this link between prior wakefulness and Sleep Pressure as part of your sleep training next week.

To counter the effects of a steady, gradual increase in Sleep Pressure through the day, your body has a dynamic alerting mechanism that’s regulated to a large extent by your circadian rhythm.

As we wake in the morning, the gradual increase in light signals to our brain that morning has arrived.

Melatonin production decreases, and other hormones such as cortisol are released which wake us up and gradually increase our alertness at the start of the day.

In the morning after a good night of sleep, our Sleep Pressure is at it’s lowest, and our body doesn’t require much of a Wake Drive to maintain alertness.

As we move through the morning and into the early afternoon, this Wake Drive increases to match the gradual increase in Sleep Pressure as adenosine begins to accumulate in the brain.

For many people there’s a natural dip in alertness in the mid-afternoon as our Wake Drive drops slightly while our Sleep Pressure is still building.

This is what many cultures around the world use as their cue for a mid-afternoon siesta.

As we move past the mid afternoon and into the early evening our circadian rhythm provides one last burst of alertness to overcome the Sleep Pressure as it builds to it’s maximum for the day, just prior to bed time.

As day turns to night and bed time approaches, our brain registers the transition from light to dark as the signal to start producing melatonin.

This forces the alerting mechanisms in the brain to begin their shutdown for the day, and Sleep Pressure starts to overcome our Wake Drive, eventually leading to sleep.

At least that’s what happens when you aren’t dealing with insomnia.

We mentioned above that your Wake Drive is determined to some extent by your circadian rhythm.

So it’s probably a good idea to take a closer look your circadian rhythm and how it effects your ability to sleep.

Often referred to as your “body clock”, the circadian rhythm is a cycle that tells your body when to sleep, rise, eat and more.

There are clear patterns of brain wave activity, hormone production, cell regeneration and other biological activities all linked to this daily cycle.

Exactly when these process are triggered depends on various environmental cues such as light exposure or temperature.

When your circadian rhythm is disrupted, sleeping and eating patterns can get out of whack such as what your body experiences with jet lag or when you work a rotating shift schedule.

A growing body of research is looking at the negative health impacts that can occur when your circadian rhythm is disrupted.

Some of these impacts include increased risk of cardio-vascular disease and obesity as well as increased likelihood of developing neurological conditions such as depression or bipolar disorder.

The SCN is a tiny region of the brain found in the hypothalamus and it’s responsible for controlling your circadian rhythms. Because of it’s function, it’s also known as your ‘Master Clock’ – it sets the timing for all of the other ‘clocks’ within your body.

The neuronal and hormonal activities it generates regulate many different body functions over a 24-hour cycle.

How Does Light Impact Your Circadian Rhythms? 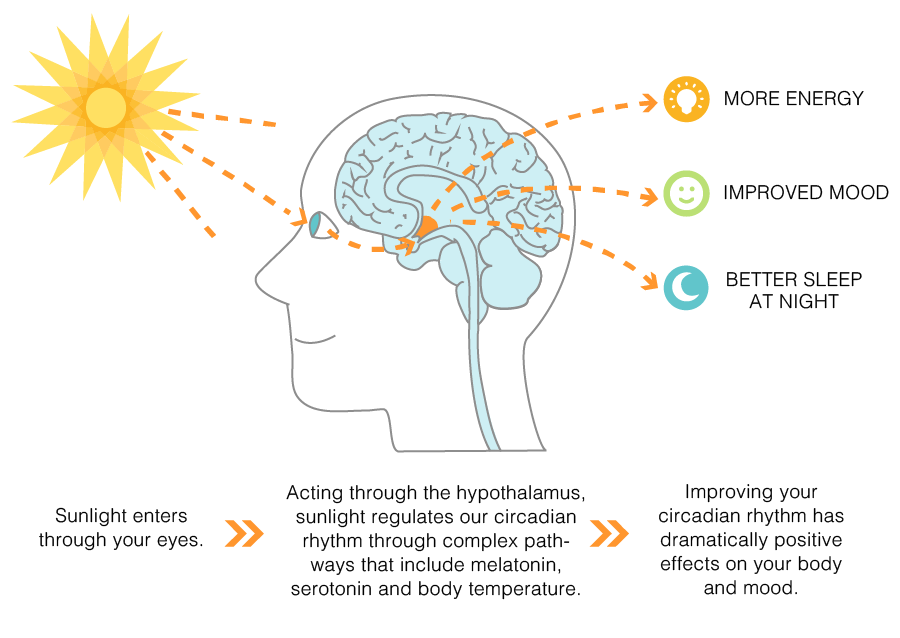 Light is the most important external variable when it comes to your circadian rhythm. The SCN knows exactly when to trigger various processes in the body based on the light signals it receives from the optic nerve of the eye.

The light/dark cycle is what your SCN uses as it’s main cue for the timing of the various process that make up your 24 hour cycle.

When it comes to your ability to sleep, two of the most important hormones regulated by your circadian rhythm are melatonin and cortisol.

Exactly when the body produces these hormones is determined to a large extent by light exposure, particularly in the case of melatonin.

At the start of the day your SCN registers a transition from darkness to light.

It’s response is to down regulate your production of melatonin and increase production of cortisol. The resulting effect is that you wake up and become more alert and active.

At the end of the day as the sun goes down, a reduction in light brightness is registered by the SCN and it begins to produce melatonin and reduce the amount of cortisol in your body.

This in turn triggers other processes which makes you drowsy and more able to fall asleep. 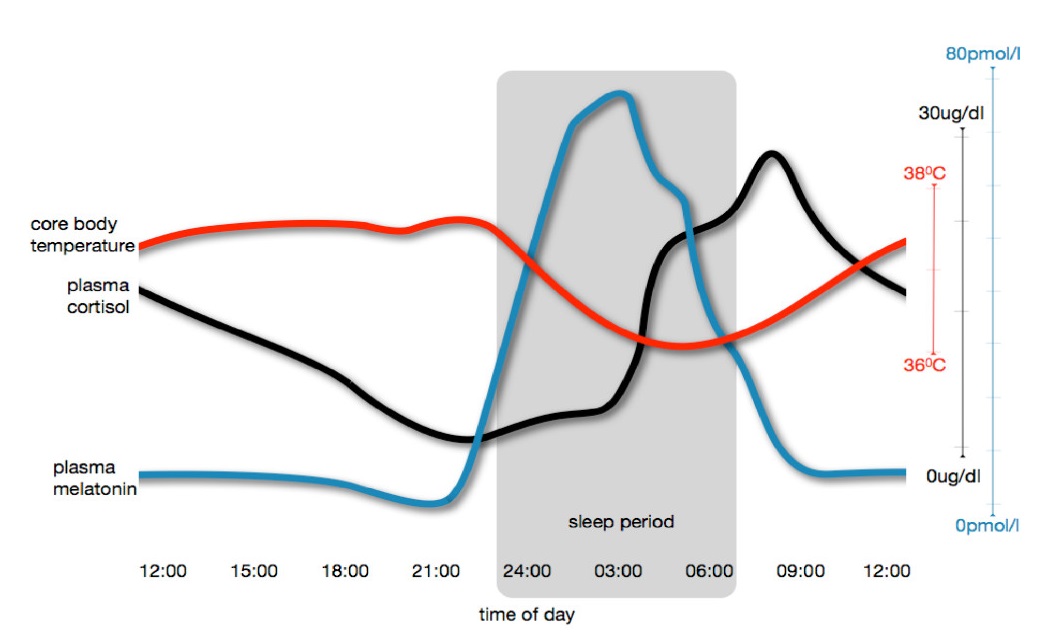 Often times when you hear of melatonin it’s in reference to it being used to help you go to sleep. But it’s not the melatonin itself that makes you sleepy.

Melatonin is a sleep and body clock regulator NOT a sleep initiator.

It’s an important distinction that you need to understand.

Melatonin is also known as the vampire hormone because it’s produced in darkness and it’s production is inhibited by light.

When your eyes recognize the transition from light to dark this triggers the release of melatonin which in turn triggers other responses in the body to prepare you for sleep.

On the flip side, when the brightness of the light you’re exposed to begins to increase, your body responds by shutting down the production of melatonin.

For people with insomnia, there is often a desire to sleep in later to catch up on lost sleep.

One of the main reasons this is bad for consistently good sleep is because by sleeping later you’re essentially pushing back your circadian timing.

This means your body will then naturally want to go to bed later, further damaging your ability to fall asleep when you want to, and a vicious cycle is created.

If you look back at the image above you’ll notice that there is a red line showing how body temperature changes throughout the day.

The thing to take note of is how body temperature begins to fall just before the shaded blue/grey area which indicates sleep period. It then continues to drop through the night before beginning to rise again in the morning.

There is cascade of events that happens leading up to sleep.

This drop in body temperature immediately preceding sleep is one of the most crucial, particularly for people with sleep-onset insomnia.

Often times there is a delay at night in this temperature drop, which is part of the reason why you struggle to get to sleep.

You can’t really fall asleep until your body temperature (and actually your brain temperature) begins to drop.

So let’s tie this all together…

Their is a dynamic interplay that happens between our Sleep Pressure and our Wake Drive.

In a healthy sleeper there is a nice balance between the two.

Our Wake Drive operates through the day in such a way that it’s always on and is ‘drowning out’ the Sleep Pressure as it builds.

But as we come to the end of the day the Sleep Pressure starts to win out over the Wake Drive, and we fall asleep at an appropriate time.

Through the night our Sleep Pressure gradually decreases as adenosine is cleared and the process starts all over the again as the sun comes up the next morning.

For someone suffering from insomnia, this system doesn’t work efficiently.

You’ll have a Wake Drive that is too strong, or a Sleep Pressure that is too weak or a combination of the two.

For people suffering from sleep-onset insomnia, the Wake Drive is too strong and the Sleep Pressure too weak at the time you’re trying to go to bed.

You therefore struggle to fall asleep.

And for someone suffering from sleep-maintenance insomnia, your Wake Drive is kicking in earlier than it should be and your Sleep Pressure isn’t strong enough through the night to keep it switched off.

So at it’s core, insomnia is an issue related to a Wake Drive being too strong, and a Sleep Pressure being too weak.

But how does this imbalance occur?

How Does Insomnia Develop

So we’ve already established that an overactive Wake Drive and a weak build up of Sleep Pressure can result in poor sleep.

This situation can (and does) happen to even the healthiest of sleepers on any given night.

But it’s when this imbalance isn’t addressed that it can develop into insomnia.

Below is a general breakdown of how this can occur i.e how poor sleep in the short term can turn into short term and chronic insomnia.

Let’s say you started off with a few days of poor sleep – we’ve all experienced this before.

Short term poor sleep is often caused by some new additional stress in our lives – death in the family, issues at work, relationship difficulties etc.

From an evolutionary perspective this makes sense.

When our caveman ancestors were experiencing stress, it was generally of the ‘about to be attacked by a predator’ life-endangering kind.

At that point sleep was a luxury that couldn’t be afforded, so the Wake Drive system would kick into overdrive to make sure they were vigilant and alert until the stress had passed.

This ‘overdrive’ state is also known as hyperarousal.

Fast forward to today and the ‘stresses’ we experience.

Our body doesn’t distinguish between a life threatening event, and a deadline at work.

Both will potentially put you into a state of hyperarousal.

So this initial state of hyperarousal causes a few nights of poor sleep.

As we experience multiple nights of poor sleep, we start to change how we think and behave.

We begin to worry about the sleep loss that’s been building up and how long it might continue for.

We start to focus more and more on sleep when we get into bed, almost willing ourselves to fall asleep NOW.

But thinking about sleep in this foreceful way has the opposite effect and actually results in us being more awake in bed.

We might start going to bed earlier, thinking this will allow us to catch up on lost sleep.

But our Wake Drive is too strong and Sleep Pressure hasn’t had time to build up, so we spend more and more hours awake in bed.

We then begin to build stronger associations between being in bed and being awake, further adding fuel to the fire.

Next we decide that to catch up on sleep we’re going to sleep-in.

Unfortunately this throws our circadian rhythm out of whack and further reduces the Sleep Pressure we feel at the time we’d ideally like to be going to bed.

Now we’re starting to feel more and more stressed about our sleep.

And as you’ll learn in a future lesson, stress is a true enemy of good sleep due to the stress hormones and their inverse relationship with our sleep hormones.

So our negative thinking about sleep, our lack of belief in our ability to sleep and our reactionary behaviors as we try harder and harder to sleep results in one or two nights of poor sleep turning into weeks and months of insomnia.

So once you understand how these thoughts and behaviors gradually reduce your ability to sleep well, you’re in a much better position to use the tools of CBT-i to get your Wake Drive and Sleep Pressure in balance to promote healthy sleep.

Because the good news is that these changes in your thoughts, beliefs and behaviors are completely reversible.

Let me say that again.

These changes are completely reversible.

If you’re suffering from insomnia and you’d like to access an online CBT-i program you can head to the link below for more information.